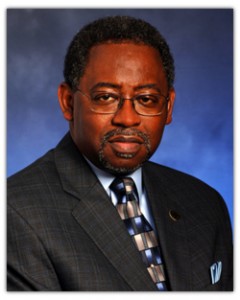 Born in Chattanooga, Tennessee, Judge Williams achieved his life long dream of becoming a Judge in March 1991. In his first political race, obtaining 56% of the vote, he won election as Judge of the Chattanooga City Court for a term of eight years. His judicial style, no-nonsense approach and unusual alternative sentences have gained him national attention along with numerous awards and honors. He was featured on the initial segment of CBS’s “Street Stories” hosted by Ed Bradley; and has appeared on CNN, the 700 Club, and in JET, NEWSWEEK, READER’S DIGEST, SOUTHERN LIVING and other publications.

While a student at Morehouse, Judge Williams received a certificate in Drug Abuse Counseling from the University of Miami School of Medicine through a U.S. Office of Education sponsored summer program.

Judge Williams practiced law with the Regional Counsel’s Office of the Internal Revenue Service in Atlanta, Georgia, prior to entering the private practice of law. In 1980 he became a partner in the law firm of McClarty & Williams in Chattanooga, Tennessee, where he primarily handled personal injury, corporate, estate and municipal law cases. He also taught for eight years as a full-time Assistant Professor of Marketing & Business Law at the University of Tennessee at Chattanooga while maintaining a full-time law practice.

Active in numerous community organizations, some of Judge Williams’ present and former board memberships include: Valley Capital Corporation, The Ronald McDonald House, Friendship Haven Home For the Elderly and the Baylor School Parents Council. Recently, Judge Williams was elected Chairman of the Board of the Westside Community Development Corporation, which is designed to revitalize his old childhood neighborhood and provide services to residents in the targeted area. He also served a number of years as Chairman and member of the Board of Trustees of the Hamilton County Governmental Law Library. He is a Life and Thousandaire Member of the Morehouse College National Alumni Association.

Strong in his religious convictions, Judge Williams is a deacon at First Baptist Church (East Eighth Street). Judge Williams is also on the Board of St. Barnabas Nursing Home and Retirement Apartments where he serves on the capital campaign and strategic planning committees. Recently he retired as the Chairman of the Scholarship Committee of the 100 Black Men of Chattanooga having served in this position for 11 years guiding more than $250,000 in scholarship awards.

True to his belief that “education is the key to success,” Judge Williams proudly reports that more than 893 defendants have obtained their General Equivalency Diplomas (G.E.D.) since he took office, with an additional 500 still under the Judge’s mandate to do so. He has also been instrumental in directing more than 300 students to further their education at Chattanooga State Technical College, the University of Tennessee at Chattanooga and other schools.

Records in Chattanooga City Court also show that in a two-year period of time, Judge Williams reduced the number of repeat offenders in his Court by 50%; assisted a number of persons in obtaining employment; and directed at least eight (8) persons off of welfare into self-supporting jobs. Current City records show that Judge Williams’ modernization and hard work has increased excess revenues above expenses from $500,000 in 1991 to more than 1.3 million dollars in 1999.

Judge Williams created the first Environmental Court docket (1991) in Chattanooga to assist in cleaning up the City. In this docket, persons are cited to Court for littering, zoning violations, housing code violations, and various other similar matters as set forth in City ordinances. In less than two years, the City of Chattanooga boasts an increase in compliance with code regulations from 30% to 86% as a result of Judge Williams’ strong and deliberate actions in the Environmental Court docket.

In March, 1999, Judge Williams was re-elected to a second eight-year term by the voters of Chattanooga. He captured 70 percent of the vote and turned back challenges of two lawyers who sought to unseat him. Although his challengers engaged in negative campaigning, Judge Williams took the high road and told the voters -“Let thy work speak for me.” The Judge has not changed how he does things and continues to be about the business of changing lives of those who come before him. He proudly states that his motto in life comes from an old song -“If I can help somebody as I pass along, then my living shall not be in vain.”

Judge Williams decided to retire from the bench on May 2, 2003, and return to the private practice of law after serving 12 years on the bench and having 18 years of service with the City of Chattanooga. He served as a senior partner in the law firm of McKoon, Williams, Atchley & Stanley, PLLC until he retired in August, 2015.